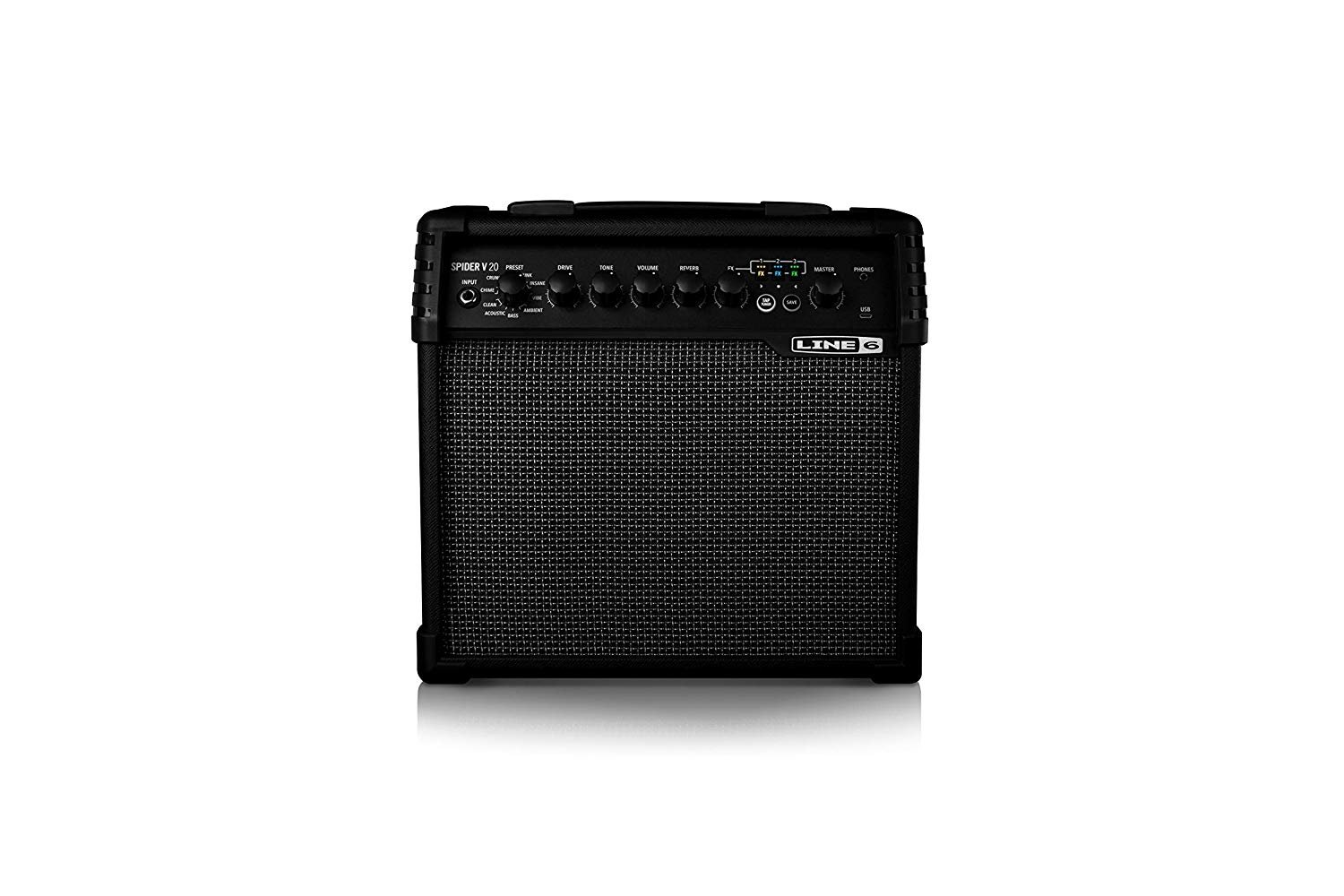 The Spider® V 20 amp has been designed to sound great right out of the box, and its easy-to-use controls and compact size make it the ideal practice amp for any guitarist—from beginners to seasoned professionals. Select one of 16 tonally-diverse amp and effect presets, then use the intuitive interface to quickly tweak that tone to your personal taste if you’d like. Each preset contains three effects that can be switched in and out stompbox-style using the dedicated FX buttons on the front panel. Turning the Reverb knob adds atmosphere and depth to your sound, and you can tap in delay times and modulation rates with the Tap/Tuner button. Press and hold the button to access the onboard tuner.

A micro USB port makes it easy to connect the Spider V 20 amp to your Mac or PC, or iOS and Android device*, where you can edit your tones via the free Spider V Remote app, or record your performances with the included Steinberg Cubase LE DAW.

Intuitive and Easy-To-Use Controls
Designed to sound great right out of the box, Spider V 20 features an intuitive interface with color-coded controls and dedicated front-panel buttons that make it easy to simply plug in and begin practicing. It’s the ideal practice amp for guitarists of all skill levels—from beginners to touring professionals.

Choose From 16 Presets
Spider V 20 features 16 diverse amp and effect presets ranging from Clean to Crunch to Insane, as well as Acoustic and Bass presets, so you can easily dial in the specific sounds you need when practicing different styles of music. Each preset contains three effects that can be switched in and out stompbox-style using the dedicated FX buttons on the front panel.

Essential Features
The Spider V 20 amplifier includes lots of features that make practicing easier and more fun. Tap in delay times and modulation rates to match the song you’re playing along with using the Tap/Tuner button, and press and hold it to access the onboard tuner. Use the dedicated Reverb control to add atmosphere and depth to your sound, and plug your headphones into the 1/8" stereo headphone jack to practice without disturbing others.

Take Spider V 20 With You
Standing less than a foot tall and weighing only 11 pounds (5 kg), Spider V 20 is the ideal practice amp for guitarists on the go. But don’t let its small size fool you—with 20 watts of power, Spider V 20 can get loud.

Free Editing and Recording Apps
Connect Spider V 20 to a Mac, PC, or mobile device via the Micro USB port, and use the Spider V Remote application to access additional amps and effects, edit presets, and create your own personal presets compatible with all the amps in the Spider V Series. Download the Steinberg Cubase LE recording application for free when you register your Spider V 20, and use it to easily record, edit, and mix your performances.